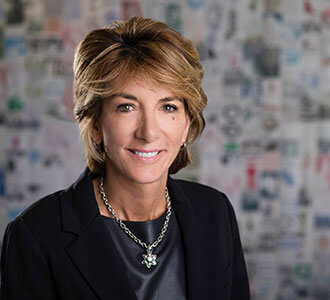 Apparel has been the focus of Katherine Gold’s career since the beginning as she started as a buyer for the fashion department at Macy’s. Several years later she joined her father William Gold, who founded Goldbug in 1968, and shifted into the children’s clothing sector. Over the years, Katherine has built the business into one of the United States’ largest designers and providers of children’s apparel and accessories.

As a female leader in her industry and the sole owner of Goldbug, Katherine is proud that her company is Women’s Business Enterprise National Council (WBENC) certified. WBENC is the largest third-party certifier of businesses owned, controlled, and operated by women in the United States.

A proponent for children’s issues and education, Katherine has become an advocate and leader on board associations and in the non-profit community.

Past
• Former Chair of the Juvenile Products Manufacturers Association which represents the multi-billion dollar children’s furniture and bedding industry.
• Served on the Board of the Colorado Children’s Campaign as past Chair.
• Served on The Federal Reserve Economic Advisory Council, 10th District.