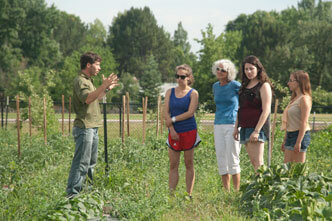 Margery Goldman, a donor-advised fund holder, and Marvin’s granddaughters on a site visit to learn more about Ekar Farm, a Foundation grantee

A Grandfather’s Spirit of Giving Lives On

Margery Goldman loved many things about her husband Marvin Naiman, a successful real estate developer and investor who died in 2005. One of the qualities she loved most was his philanthropic nature.

“Marvin was a man of extraordinary passion,” she says. “He was committed to social justice and seeing change in the world. And he was very generous with his time, as well as his money. There was a steady stream of people coming through our house asking for his advice. He always told people that success would come if they followed their passion.”

When Marvin died, he left behind seven grandchildren. As they grew, Margery felt a desire to help them understand their grandfather as a philanthropist. So in 2011, she established a donor-advised fund at Rose Community Foundation called the Papa Marv Fund to honor the name Marvin was called by his grandkids.

Margery has structured the fund to enable and encourage the direct participation of Marvin’s grandchildren, who range in age from nine to 23. The initial plan is to hold three funding cycles annually. For each of the first two cycles, each grandchild is allotted $500 that they can choose to direct to any qualified charity. The third cycle’s donation will be a group decision made by all of the grandchildren.

“One of the questions I had to ask myself when setting up this fund was, ‘Am I in any way trying to impose my ideas on the kids in terms of what I want them to give to?’ At first I thought I wanted to limit the giving to people. But then I realized that I can’t say where the line is between animals and environmental justice,” says Margery. “I just decided to follow Marvin’s lead and make it no restrictions – where their passion leads is where their success will lie.”

With some of the grandchildren away at college, the logistics of gathering as a group are a challenge. In addition to holding two meetings, Rose Community Foundation staff has been acting as a resource, staying in touch, giving suggestions and answering questions about different areas of interest.

Marvin’s son, Hal Naiman, is the parent of one of the grandchildren. His sisters Laurie Abelman and Jill Snyder have three children each. “At the first meetings we’ve had, everyone was really enthusiastic and exited to participate,” Hal says of the grandchildren’s reaction. “It’s too early to know specific results but it can only be a good thing for us as a family community to be able to look at the world in this way. To learn how to choose what you feel is important, and to explore how to best help people – that’s all good.”

Margery is hopeful that participating in the Papa Marv Fund will help her stepgrandchildren develop a fuller understanding of their grandfather. “Marvin was an incredibly generous person. His grandchildren didn’t really know him as a philanthropist so I wanted them to have that legacy. My hope is that they will develop the love of giving that he had.”