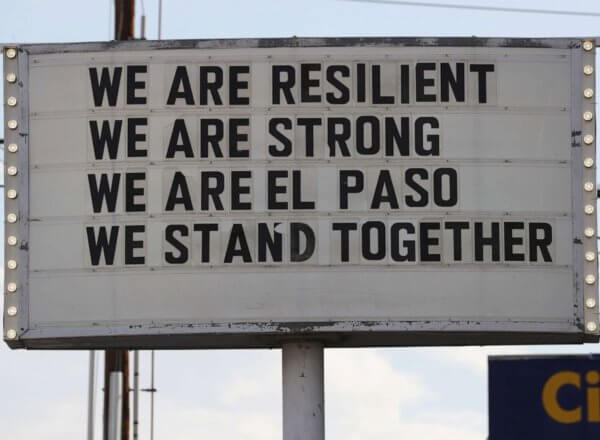 My Heart is in El Paso

In October 2018, I issued a statement following the Tree of Life Synagogue shooting in Pittsburgh because anti-immigrant sentiments and anti-Semitism had fueled domestic terrorism against the Jewish community.

In May 2019, I wrote a blog following the STEM School Highlands Ranch shooting, because the issues of mental health and access to guns had once again tragically collided in a Colorado school.

Today, I am compelled to write again.  Not because this has been the third mass shooting since last fall.  Sadly, there have been at least three in the last week alone.  But I feel compelled to write because xenophobia and hatred have once again claimed mass casualties — and this time it happened in El Paso. (In the few hours between starting to write this and posting it, a mass shooting happened again in Dayton, Ohio).

My mother was born and raised in El Paso.  My parents were married in El Paso.  My fondest childhood and teenage memories involve summer and winter vacations in El Paso to visit my grandparents, cousins and beloved family friends – many now of blessed memory.  My grandfather was retired from the now-closed department store owned by my grandmother’s relatives, which had one of its locations at the now-infamous Cielo Vista Mall.  We had great adventures during those visits – on both sides of the border.  I got to know wonderful people on those visits – from both sides of the border.

In this era of inflammatory rhetoric about immigration, there are those who spread fear of the border and the people who wish to cross it.  But if you know El Paso, you know it tells a different story of the border. Long one of the safest cities in America, El Paso is a beautiful city, rich in diversity, where culture, commerce, arts, military and academia intersect.  A city that celebrates its relationships, economic and multicultural ties on both sides of the border. Home to a vibrant LatinX and Jewish community – where one of the heroes emerging from Saturday’s tragedy is African-American — it may be one of the smaller cities in America to have a Holocaust Museum and Study Center.

The Women’s March of El Paso Facebook page shared the following message to the shooter, illustrating the inclusive ethos of El Paso: “We would have embraced you. We would have shown you the ways of our city. We would have shared our food, our drink, and dance. We would have taken you on a tour to see the downtown district, the view from scenic or the sunset from Transmountain. We would have introduced you to our family, blood [or] not. Our grandmothers would have cooked for you, our uncles would have talked cars with you. You would have been adopted into the family that is El Paso way of life. We would have given you the love you are so obviously missing from life. This is what El Paso does, we embrace our differences and we thrive because of them. Instead, you drove 10 hours with an angry hate-filled heart. You took the lives of innocent people for no reason other than your own hate. You did not know them, you do not know us. We will show you we cannot be broken by your hate. We will show you the love and resilience this city has as we embrace each other and begin the long healing process.”

The normalization and weaponization of hate have cost far too many lives.  If we don’t come together to take a stand against hate and misinformation and actively work to change the narrative, the normalization and weaponization of hate and xenophobia runs the risk of costing America its soul.  We demonize and go to war against countries where people are radicalized by hateful propaganda against those who are different from them, yet what are we doing to prevent that same radicalization and incitement to violence from happening within our own country?

El Paso is certainly personal for me.  But anytime our shared values, humanity and security are violated, it must be personal for all of us.

To share your thoughts (and perhaps, prayers) with elected officials at any level of government, visit https://www.usa.gov/elected-officials/.

With Foundation resources and donor support, Rose Community Foundation is in its third year of Community Action Fund grantmaking to Greater Denver-area organizations working with immigrants, refugees and asylum-seekers as well as organizations supporting communities vulnerable to hate and discrimination.