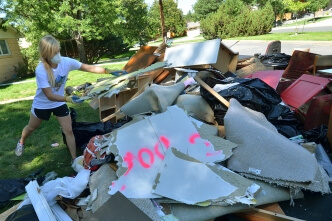 Foundations Come Together for Collective Impact on Disaster Recovery

Colorado has seen many disasters over the years. From devastating wildfires, to the Aurora shooting,and the historic floods that left incredible destruction across 17 counties in September 2013.

When disasters strike, most of us are compelled to find a way to help, and at Rose Community Foundation, we are just as compelled to be part of the healing and recovery process. The question at hand is, “Where can we best make a difference?”

We’re not alone in asking that question. Foundations across Colorado and nationally are asking, “What is the best role for foundations in the disaster recovery process?”

Starting in Spring 2013, we – together with the Colorado Association of Funders – have been leading a task force comprised of many of Colorado’s largest private and community foundations to evaluate how to most effectively play a role in disaster recovery.

“We’ve learned a lot from experiences following the Aurora shooting, wildfires and other disasters, as well as from the Center for Disaster Philanthropy,” shares Sheila Bugdanowitz, Rose Community Foundation president and CEO and task force chair.

“We realized the best role for foundations is to take the longer view,” explains Bugdanowitz. “It’s not in the government’s work or in the work of organizations set up to meet immediate needs. It’s the work that’s further out.”

Lessons learned from the Aurora shooting offer an example. “All the money raised went into a victims fund,” explains Joanne Kelley, executive director for the Colorado Association of Funders. “After it was distributed to the victims, there was a need for mental health healing centers for the community, but there was no money left. Foundations feel they can play a critical role in disaster recovery by funding longer-term community needs that the general public isn’t as willing to support,” she adds.

The task force is also focused on a collective approach. “To have the biggest impact, foundations feel they have to do this together,” says Kelley.

Within just a few months of starting these discussions, Colorado was hit by flooding, offering an opportunity to pilot the concept. The Colorado Association of Funders established a longer-term Colorado Funders Flood Recovery Fund for its member foundations interested in collectively responding to issues that emerge across the affected region. Rose Community Foundation is the fiscal sponsor and a contributor.

“The idea is to stop and wait for all the near-term relief to happen,” explains Kelley. “The fund isn’t intended to provide assistance directly to flood victims. The funders who contribute to the longer-term fund will work with the communities affected to determine the greatest needs not covered by other funding. Such needs might include mental health services, environmental concerns or community engagement activities.”

In addition to playing an important role in the long-term recovery from the floods, the foundations involved also hope to learn from this process. “We hope to have good community conversation about what’s really needed, and to learn how the foundation community can best respond following disasters,” says Kelley. In addition to responding to long-term needs through the Colorado Funders Flood Recovery Fund, Rose Community Foundation has also committed to matching flood relief donations made by Foundation trustees, committee members and staff.