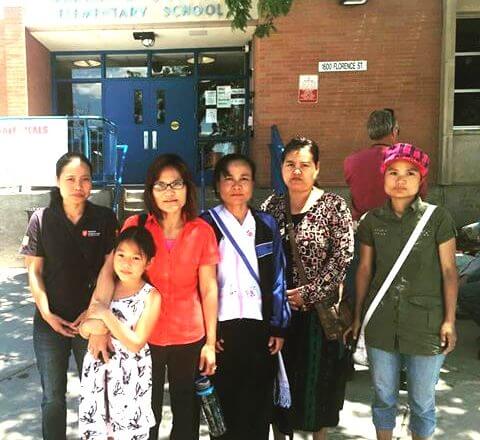 In the community room of Mango House, a community center for refugees just off of East Colfax in Aurora, a panel gathered to speak to school board members, school leaders and community leaders about reactions to innovation plans affecting several Aurora schools. The members of this panel — comprised of parents and grandparents — spoke through interpreters, because their English is limited. They were all native speakers of Nepalese and Karen, one of the 100 languages spoken in Burma. Many of them have been in the United States and in Denver for three to five years, and they have children and grandchildren in elementary, K – 8 and high schools in the Aurora Public Schools.

RISE Colorado convened this panel as part of its effort to ensure that the voices and needs of these immigrant families are incorporated into the new innovation plans for schools that serve them and their children. The panel is also an example of the results Rose Community Foundation hopes to see from its funding of advocacy and engagement work in education.

One of the 2016 priorities for the Foundation’s Education Committee is to “bolster the role of parents and communities to support new school design and address challenges around new school models.” While it is supporting the Aurora Public Schools in gaining approval for an innovation zone, the Education Committee is also funding RISE Colorado for work it is doing to ensure that families whom the district has traditionally had difficulty reaching out to in the past have a voice in the process.

Education Committee member John Barry, who formerly served as the superintendent for the Aurora school district remarks that, “For Aurora Public Schools, one of its great strengths is its diversity — in the form of a student population that comes from 120 different countries and that speaks 130 different languages. This strength is also one of its greatest challenges as it works to accelerate academic achievement and close the achievement gap.” Facing this challenge, he says, requires partnerships among many different groups, including parents, universities, teachers and teachers unions, among others. “It is apparent that school districts cannot meet these challenges alone,” he says.

Lopez and her committee believe it is healthy to support outside advocacy organizations who are working with particular groups of families during the innovation process, while also financially supporting the district. These outside organizations like RISE Colorado have capacities that the district does not have for training parents to be engaged.

RISE Colorado believes that one of the keys to closing the opportunity gap for low-income children and children of color is to ensure that their parents and caretakers are advocating for quality schools. Veronica Palmer, the organization’s co-founder and co-CEO, says that their program begins with in-school workshops for parents about the opportunity gap itself. “They know something is going on, but they do not quite know what, or have a name for it,” she says. The workshops then point to the critical role parents and families can play by being engaged with schools and being advocates for students beyond the classrooms by supplementing and supporting their learning at home.

“Unlike some other advocacy organizations, we have no particular issue agenda,” says Palmer. “Our only mission is to make sure that families are educated about how they can make a difference, be engaged with their school and empowered to surface issues within their own school, and ultimately to be part of decision-making bodies in the school system.”

Back at the community meeting, the parents and grandparents thanked officials for involving them in the process and in the development of the innovation plans. They emphasized requests for things that would help them continue to be engaged in their children’s education: home visits from teachers and school staff, interpretation and translation services at school meetings and events, and translation of standard school voicemail messages into their languages. They also asked for the availability of summer school and an increased number of paraprofessionals in classrooms throughout the school year to help students who are academically behind catch up and be ready for the next school year.

While the district is working on meeting some of these requests like more interpretation services and home visits, others require additional funding or drawing on scarce resources. It is increasingly difficult to find and hire paraprofessionals with the second-language skills needed, for example.

But the work that RISE Colorado has done to help this group of parents be involved for the first time with their children’s schools has helped school and district leaders understand their needs more clearly. The organization hopes that as parents see that their voices and involvement make a difference, they will become involved at other levels within innovation zones and in the district itself on policy issues. Their voices can help school and district officials change how they view priorities, teacher training, and parent and family outreach. “It will take time and patience, but we can work together to be creative and innovative,” says Palmer.

About Innovation Schools
State education policy allows districts to approve innovation status for schools, which permits them to remain in the district while giving the school and school community flexibility in terms of structure, programming and governance to meet a particular community’s needs. In the Aurora Public Schools, many of the schools that have gained approval from the state and the district for innovation status are underperforming and hope innovative redesigns will result in turning around school performance and student achievement.