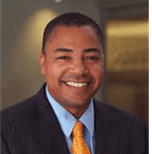 Paul Washington is a highly respected business and civic leader in Colorado. Throughout his 30-year career, he has developed expertise in: business strategy & execution; managing a P&L; finance; M&A; law; economic development; and corporate governance.

Mr. Washington currently serves as the Executive Vice President for IMA Financial Corp., a diversified financial services company focused on protecting the assets of its widely varied client base through insurance and wealth management solutions. Mr. Washington oversees corporate partnerships for IMA and supports the firm’s real estate needs as it expands throughout the U.S. He also manages IMA’s technology investment fund and its innovations.

Prior to his role at IMA, Mr. Washington served as Market Director for JLL, an international Fortune 500 commercial real estate services firm with over 90,000 employees worldwide. There, he oversaw business strategy and day-to-day operations, with full P&L responsibility of all JLL business units across Colorado, Utah and Idaho. He was responsible for managing a team of more than 300 professionals and ensuring integrated business development opportunities for all business lines: Tenant Representation, Corporate Accounts, Capital Markets, Project Development Services, Public Institutions, and Landlord Leasing. He held this position from 2017 to 2021 and he consistently grew revenue.

While at JLL, Mr. Washington developed annual and long-term business strategies, grew to #1 market share in key growth submarkets, recruited a top-performing multi-family brokerage and finance team, oversaw the buildout of JLL’s 30K sf regional headquarters into an award-winning office space, and improved diversity by recruiting more women brokers (as a percentage of total employees) than any other region at JLL.

Mr. Washington previously served as the Executive Director of Economic Development for the City of Denver, a Mayoral-appointed cabinet-level position where he managed a $60M annual budget and a staff of 290 employees and developed and oversaw the execution of the economic development strategy of the City and County of Denver. Notable accomplishments while in this role include the reduction of the default rate on the City’s $140M small business loan portfolio from 18% to 5%; successfully recruiting a dozen corporate and divisional headquarters to Denver; and developing and executing the 2012-2016 JumpStart economic development strategies, which directly influenced the creation and retention of more than 30,000 jobs and leveraged $818M in private capital investment.

Mr. Washington also enjoyed a 10-year career in investment banking. He was the founder and president of LJS Holdings, an international investment banking firm, where, among other accomplishments, he represented GHCL Ltd., a large conglomerate based in India, on its acquisition of Dan River, Inc., the 2nd largest textile company in the U.S. He began his career as a corporate attorney, focused on mergers and acquisitions of public companies, for the international law firm of Hogan Lovells.

Mr. Washington is considered one of the most influential business and civic leaders in the State of Colorado. In 2019, he was recognized as the Most Admired CEO by the Denver Business Journal. He also serves on numerous boards including Denver Health, Colorado Housing Finance Authority where he is chairman of the finance committee, Colorado Concern and the Downtown Denver Partnership. He was also the former vice-chairman of the University of Northern Colorado board of trustees.