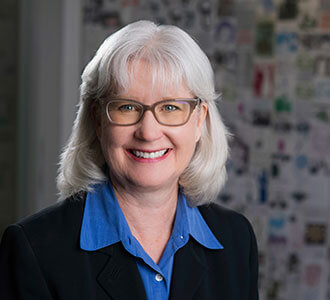 Ellery previously oversaw the Aging program area, and played an active role in Foundation’s initiatives including Changing the Narrative, Boomers Leading Change and Latino Age Wave of Colorado. Her professional background includes nearly a decade at Adult Care Management, Inc. where she first served as care manager and ultimately as director of program and community development. While there, she developed a housing-counseling program for older people in collaboration with the AARP. She also worked in outreach for Salt Lake County Aging Services in Utah. Additionally, for three years, Ellery promoted and developed resources and services for the HIV/AIDS population of metro Denver when she served on the Ryan White Funds Distribution Committee at the invitation of the Mayor’s Office of HIV/AIDS Resources.

Ellery served on the national board of Grantmakers in Aging (GIA), chaired its Membership Committee and served on GIA’s Conference Planning, and Program Development Committees. She currently participates on GIA’s Diversity Committee. Ellery has been involved with the Douglas County Senior Services Council, the Retired Senior Volunteer Program Advisory Council, and is a founding member of the Douglas County Colorado TRIAD. She participated in a 2003 meeting on the National Agenda for the Environment and the Aging through the U.S. Environmental Protection Agency’s Aging Initiative, and AARP’s 2004 Mobility Forum to develop an agenda to enhance mobility options for people aged 50 and over. In participation with Colorado Association of Funders, she is a founding member of the Colorado Aging Dialogue. She is a recipient of the Girl Scouts Colorado 2018 Women of Distinction Award as well as the 2019 Mayor’s Diversity and Inclusion Award from the city of Denver.

Ellery received her Bachelor of Science in psychology and a Certificate in Gerontology, both from the University of Utah.

Schedule a meeting with Therese.

Schedule a meeting with Therese Ellery