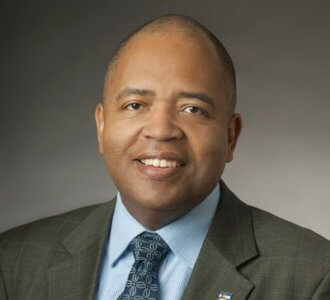 Kevin Patterson has served as Chief Executive Officer of Connect for Health Colorado since April of 2015. He previously served as chief administrative officer and interim chief of staff to Gov. John Hickenlooper and has an extensive history of public service. Kevin has served as the interim executive director of three state agencies during leadership transitions, the Governor’s Office of Information Technology, the Colorado Department of Local Affairs and the Governor’s Energy Office. He brings a strong understanding of state government and stakeholder engagement to this role. Kevin has held leadership roles for the city and county of Denver in the Budget Office, the Planning Department, the Department of Human Services, the Department of General Services and the Department of Parks and Recreation. He was elected to the Denver Board of Education in 2001 and reelected in 2005.

Kevin graduated with a B.A. in Teaching from Sam Houston State University and holds both a Master’s of Public Administration and a Master’s of Urban Regional Planning from the University of Colorado at Denver.  He serves on the Denver Zoological Foundation’s Leadership Council, the Health subcommittee of the Rose Foundation, and serves as a board member on the Tennyson Center for Children and the Keystone Policy Center.