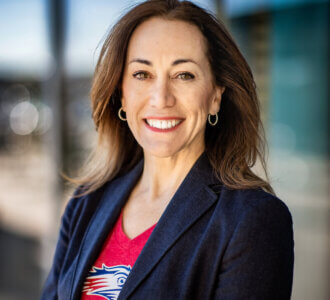 Janine Davidson, Ph.D., has served as president of Metropolitan State University of Denver since 2017. She is a national thought leader in higher education and on topics such as public service, U.S. foreign policy and national security.

As president of Colorado’s third-largest public university, Davidson is a fierce advocate for MSU Denver’s 17,500 students. From her first days on campus, she has championed the role public universities play in “holding the line on the American dream.” She has staunchly supported the DREAM Act and MSU Denver’s Deferred Action for Childhood Arrivals students, as well as its minoritized students and military and veteran students.

Davidson has spearheaded the development of high-quality, career-oriented undergraduate and graduate academic programs that serve Colorado’s communities and power its economy. She launched the University’s Classroom to Career Hub, connecting students with employers for a direct pipeline into the state and national workforce. She has also overseen the creation of the MSU Denver Health Institute – a collaboration of 10 academic departments in health-related fields that addresses state health-care-industry shortages.

Prior to her time at MSU Denver, Davidson served as the 32nd undersecretary of the United States Navy. Her appointment by then-President Barack Obama as Navy “under” followed nearly 30 years of academic, civilian and military service.

She has taught at George Mason University, Georgetown University, Davidson College and various professional military schools, and was an aviation and aerobatics flight instructor at the U.S. Air Force Academy. She recently returned to the classroom at MSU Denver, co-teaching a course on the philosophical and legal origins of freedom of speech in the United States.

Davidson began her career as an Air Force officer and cargo pilot. She was a distinguished graduate of the Air Force Squadron Officer School and was the first woman to fly the Air Force’s tactical C-130.

Her various honors include: HillVets Top 100 Most Influential Veterans; University of South Carolina Distinguished Alumna; Secretary of the Navy Medal for Distinguished Public Service; Secretary of Defense Medal for Outstanding Public Service; Girl Scouts of Colorado 2018 Woman of Distinction; the Colorado Women’s Chamber of Commerce 2019 Top 25 Most Powerful Women in Business; a 2021 Denver Business Journal Most Admired CEO; and a 2022 9NEWS Leader of the Year finalist.

At the national level, Davidson serves on the Department of Defense Policy Board, as a National Association of Public Administrators fellow and a life member of the Council on Foreign Relations. She served as a presidentially appointed commissioner for the National Commission on Military, National and Public Service and for the Commission on the Structure of the Air Force. Locally, she is a director of UMB Financial Corps and serves on the boards of the Colorado Concern, Downtown Denver Partnership, the Denver Metro Chamber Leadership Foundation and the Rose Community Foundation.