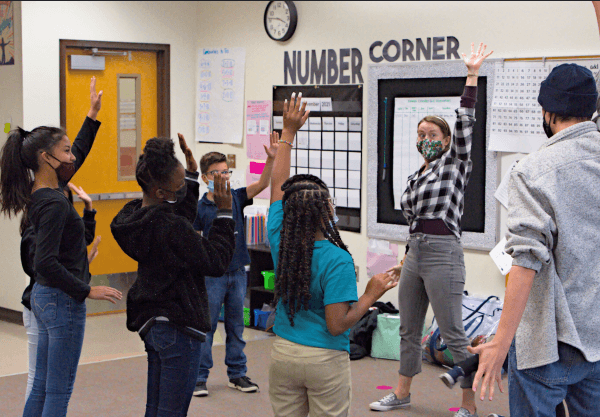 Mirror Image Arts (MIA) has long used participatory theatre as a tool to foster social-emotional learning for young people who are furthest from opportunity. The nonprofit partners with schools and youth facilities in the Denver area to provide theatre programming to young people ages 7 – 21. MIA’s youth participants, most of whom face complex traumas due to violence, abuse or poverty, reflect on their lived experiences and practice healthy stress or confrontation management techniques through role play and youth-created performances.

Over time, the criminal legal system’s negative impacts on many of the youth served by MIA became increasingly apparent to the organization’s staff, and the Denver-based nonprofit narrowed its focus in 2020 to identify a new overarching programmatic lens: disrupting the school-to-prison pipeline. “As our team of practitioners developed deeper connections with youth participants, the intersections between the education and criminal justice systems became impossible for us to ignore,” says Andrea Rabold, the organization’s executive director.

With its newly refined mission, MIA deepened its theatre programming for incarcerated youth and expanded opportunities for participants to share about the challenges they face and how the nonprofit can support them. Through participant-led performances at detention centers, systems-involved young people can process the issues that contributed to their incarceration and express resiliency so that they can exit the legal system with skills that support their community reintegration.

One participant story jumped out to the MIA staff. A young man who was about to leave prison following a four-year sentence shared that he had just been informed he owed $256,000 in restitution fees, payments ordered for financial costs related to a crime. To make matters worse, that total was accruing interest at 12 percent. And much of the total was not owed to victims but rather to third parties; from 2016 to 2020, 234 children in Colorado were ordered to pay a staggering $3,573,199 to insurance companies alone.[1]

“Our staff began conducting research and talking about the issue with other participants, and we came to understand that this was not an exception to the rule – this was the rule,” shares advocacy manager Julie Rada. “As a direct service provider, we get to hear stories and lift voices that the general public isn’t always attuned to. We decided this was an opportunity for us to translate what we were learning about a systemic issue impacting our participants into policy action.”

The MIA team did not have significant history engaging at the state legislature, so they began meeting with policy and advocacy organizations with experience working on restitution reform who helped MIA draft a formal legislative proposal and refine their advocacy strategy. Andrea and Julie met with Representative Serena Gonzales-Gutierrez and Senator Julie Gonzales, who agreed to champion the bill as prime sponsors and work collaboratively to build momentum for the proposal at the Colorado statehouse.

House Bill 22-1373 – legislation to prohibit courts from ordering juveniles to pay restitution to insurance companies – was introduced at the legislature. And on June 7, 2022, after passing through the state house and senate, the bill was signed into law by Governor Polis.

“Our organization and the young people we serve feel galvanized by this experience, and we aren’t turning back from this entry into the advocacy space,” Julie declares. “There are many narratives that need to shift about the school-to-prison pipeline, and systems-involved young people deserve to be given the tools and agency to improve the systems that affect them.”

“I don’t think we understood how important this experience would be for us as an organization,” reflects Andrea. “Passing this legislation was important, but even more critically, MIA learned and grew in ways that will equip us to tackle even bigger systemic changes moving forward.”

“Direct service organizations like ours have a real opportunity to achieve policy changes that will eventually put us out of work,” she adds. “That’s the end goal.”