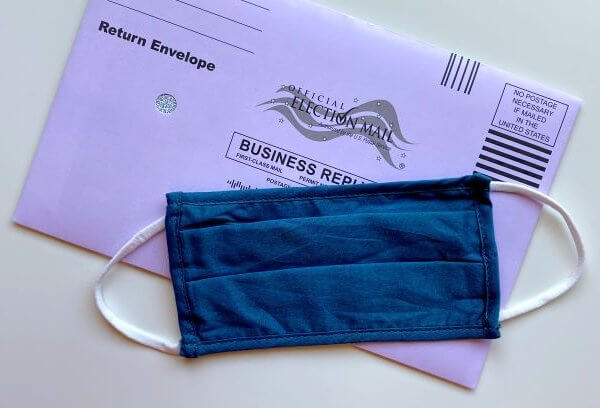 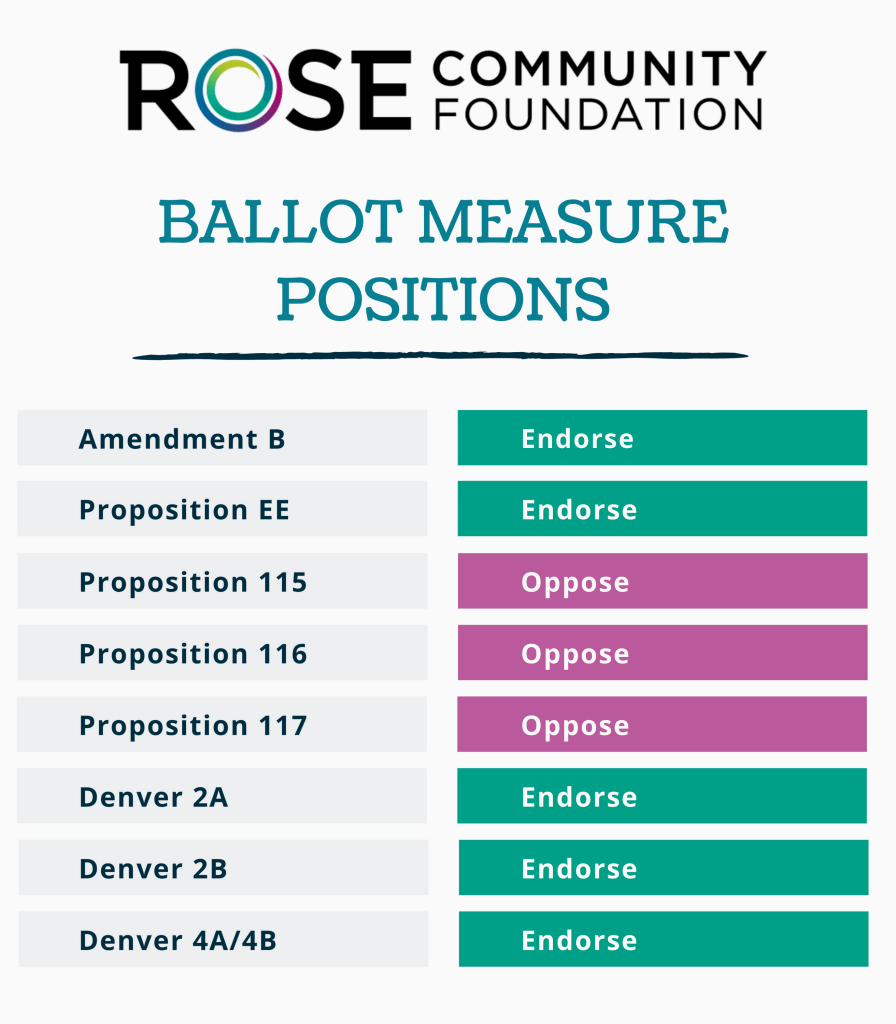 Rose Community Foundation has taken a position on several measures that will appear on the November ballot. Our position on each proposal is rooted in our organizational values, aligned with our grantmaking history and guided by our mission to advance inclusive, engaged and equitable Greater Denver communities.

As the Greater Denver region has grown and prospered, long-standing challenges and disparities have intensified, with community needs outpacing existing charitable and government resources. To make matters worse, the COVID-19 pandemic has crippled state and local budgets and contributed to significant revenue losses for nonprofits, further exacerbating disparities in health, education, housing and other important issue areas. Philanthropy alone could never address the funding gaps or structural barriers that impede equity for all communities; public policy is a critical lever and a space in which community foundations are fortunately able to participate.

Over the past 25 years, Rose Community Foundation has invested grant dollars in efforts to help craft, advocate for and implement local and statewide public policies that help advance the Foundation’s strategic priorities. Our new strategic plan builds on that history and commits us to engage in policy and advocacy work that aligns with our values and increases resources devoted to mission-aligned public good in our region.

In addition to unlocking resources for our region, the statewide and local ballot measures on which we are taking positions are largely aimed at improving outcomes for those in our community that are furthest from opportunity. Read on to learn more about the specific ballot measures and our rationale for each position.

In practice, the nearly 40-year-old Gallagher Amendment has negatively impacted local governments by requiring residential property tax cuts when the economy is down, while burdening small businesses whose commercial tax rates have gone up to pick up the slack.

The Gallagher Amendment has forced budget cuts to schools, fire departments, hospitals and other critical services throughout the state. Repeal of the Gallagher Amendment would keep residential property tax rates from dropping in future years, thereby saving school districts, local governments and state government from taking significant financial hits because of the COVID-19-induced recession. In total, the measure is estimated to reduce the state budget deficit by $300 to $500 million.

The first two-and-a-half years of revenue would support Colorado’s recovery from the COVID-19 pandemic. Afterwards, tax revenue would be used to (1) support tobacco and nicotine cessation initiatives and (2) fund universal access to voluntary preschool for all children the year prior to kindergarten entry statewide, with the greatest resources invested in those who face the greatest barriers to school success.

Rose Community Foundation OPPOSES Proposition 115. If passed, Prop 115 would prohibit abortion after a fetus reaches 22-weeks gestational age and would subject health care providers to misdemeanor charges and medical license suspension if they carry out an abortion at this stage. The measure has no exception for consideration of a mother’s health, rape, incest or fetal viability.

The Foundation supports access to affordable and high-quality health care and has long supported access to sex education and long-acting reversible contraceptives to reduce unwanted pregnancies. Restrictions to reproductive health care and family planning services create unnecessary barriers to health – especially for communities of color, people living on low incomes and those who live in areas with limited medical access.

Prop 115’s one-size-fits-all mandate ignores the uniqueness of each pregnancy and allows politics to dictate personal health decisions that should be made by a woman and her family, in consultation with her doctors. Rose Community Foundation supports equity, and this is a women’s health equity issue.

Rose Community Foundation OPPOSES Proposition 116. If passed, Prop 116 would reduce the state income tax rate from 4.63 percent to 4.55 percent for all earners in Colorado.

Income taxes make up about 61 percent of Colorado’s General Fund revenue. Prop 116 would reduce statewide revenue by an estimated $78.1 million in FY 2019-20, $158.4 million in FY2 020-21 and $169.8 million in FY 2021-22, negatively impacting the state’s ability to pay for services that support kids and families like public education and health care.

Because Colorado’s income tax is a flat tax for all earners, Prop 116 would disproportionately benefit wealthier individuals. The legislative fiscal analysis indicates that households making $50,000 per year would pay $40 less in income taxes if the measure passed; those making $100,000 would pay $80 less, and those making $200,000 would pay $200 less. Meanwhile, the decrease in state revenue would magnify disparities between wealthy and less-wealthy areas, as state funding plays a key role in equalizing funding disparities.

Rose Community Foundation OPPOSES Proposition 117. If passed, Prop 117 would require any new state enterprise to be approved by voters if the enterprise’s projected fees are greater than $100 million total within its first five years.

Enterprises are largely self-funded government-owned businesses that provide goods or services, such as the Hospital Provider Fee or Colorado Parks and Wildlife. The Foundation and its grantees have previously supported several legislature-initiated enterprise fees as a tool to increase resources for Colorado.

Enterprises are a necessary mechanism to raise revenue and provide some fiscal flexibility in Colorado. They have been particularly essential to ensure health coverage is affordable and accessible to all Coloradans. Prop 117’s passage would make it harder to create programs like the Hospital Provider Fee and Health Insurance Affordability Enterprise, both of which are helping provide critical health coverage to many Coloradans during the COVID-19 pandemic.

In order to generate the resources needed to address pressing issues in their communities, municipalities often go to voters for dedicated taxes, as required by TABOR. Although repeatedly creating earmarked revenue streams may not be ideal fiscal policy in the long run, it is one of the few mechanisms local governments can use until Colorado tackles statewide fiscal reform. Two such measures on the Denver ballot this November align with the Foundation’s priorities.

Rose Community Foundation ENDORSES Denver Ballot Measure 2A. If passed, 2A would increase Denver’s sales tax rate by 0.25 percent (or 2.5 cents on a $10 purchase) to fund renewable energy goals over the coming decades.

The proposed tax increase comes from the recommendations of the Denver Climate Action Task Force and would raise an estimated $36 to $40 million each year. Revenue would be spent creating jobs in the areas of renewable and clean energy technology and management of natural resources; on solar power, battery storage and other renewable energy technologies; neighborhood-based environmental and climate justice programs; and other environmental initiatives.

Fifty percent of this new funding would be explicitly deployed in communities of color and lower-income communities, which have been disproportionately impacted by long-standing, environmentally harmful practices.

Rose Community Foundation ENDORSES Denver Ballot Measure 2B. If passed, 2B would increase Denver’s sales tax rate by 0.25 percent (or 2.5 cents on a $10 purchase) to provide funding for housing options, rental assistance and support services.

The measure represents a long-term funding solution in support of a population whose needs have only been exacerbated by the pandemic. The City of Denver has already spent more than $24 million in emergency COVID-19-response funding for people experiencing homelessness; this proposed tax increase would create a more sustainable source of revenue for affordable housing and services for the housing insecure. As with the Climate Tax, this ballot measure is anticipated to raise an estimated $36 to $40 million each year.

Several Metro Denver school districts, including Cherry Creek and Littleton, have bond measures and/or mill levies on the ballot this fall. While we focus on Denver Public Schools below, we encourage voters in all school districts to learn about and support their district’s COVID-19-related and long-term funding needs.

Ballot Measures 4A and 4B: Bond Measure and Mill Levy

Rose Community Foundation ENDORSES Denver Public Schools Ballot Measures 4A and 4B. If passed, the bond measure would provide $795 million to build and maintain schools and expand remote-learning technology, and the mill levy would provide $32 million in operating dollars to fund priorities such as teacher compensation, mental health, nursing and special education supports.

Colorado ranks near the bottom of the country in education funding, spending around $2,000 less per pupil than the national average. These measures would increase funding for critical services, especially for students from low-income families, students with disabilities, and students learning English as a second language.

Furthermore, the bond proposal is not expected to raise property taxes, and the mill levy is expected to cost only about $4.25 per month, or $51 annually, for owners of a Denver home valued at the median $465,000.