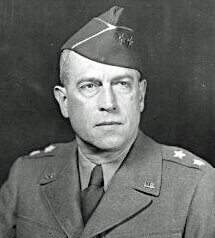 Rose Community Foundation joined lawmakers and community members at the Colorado State Capitol to kick off efforts to fundraise for the creation of a memorial statue honoring Major General Maurice Rose. General Rose, a Denver native and American veteran of World War I and World War II, commanded the Third Armored Division and was the highest-ranking Jewish officer when he was killed in action in 1945 while serving in Germany. To this day, he remains the most distinguished Jewish American soldier in U.S. history.

Rose is the namesake of Rose Medical Center, which was founded following World War II as the Denver Jewish community saw a need for a hospital to serve the entire community in all its diversity. As the foundation that grew out of the hospital’s sale in 1995, Rose Community Foundation is proud to also bear General Rose’s name as we carry on the shared commitment to service, inclusion, diversity and philanthropy.

The statue of Rose is being crafted by famed Loveland sculptor George W. Lundeen and will be located directly across the street from the Capitol in the newly renamed Lincoln Veterans’ Memorial Park. Earlier this summer, a resolution to create the sculpture passed through the Colorado General Assembly unanimously. When the statue is unveiled, Rose will be facing east because he always marched east toward Germany.

At the kick-off ceremony, House Speaker Alec Garnett admitted that, prior to the recent efforts to bring renewed attention to General Rose’s memory, he had not been familiar with Rose’s story. “He was Colorado’s proudest war hero,” said Speaker Garnett. “And what’s great about this statue is that his achievements will now be remembered from this point forward by all Coloradans who walk through this park.”

Governor Polis added, “We’re proud to honor the memory of this towering figure in Colorado’s proud history of military service by formally commemorating his life, his achievements, and his sacrifice through a monument which stands tall in Veterans’ Memorial Park.”

General Rose’s bold leadership inspired those who served with him on World War II’s front lines, and the legacy of this hometown hero continues to inspire those that serve the Greater Denver community militarily, medically, civically and philanthropically. This physical tribute to General Rose means a great deal to Colorado’s veteran community, Jewish community and all who esteem the values for which General Rose fought and died.

Funding is anticipated to be a community-driven initiative, and the statue will require approximately six months to complete once funds are raised. Rose Community Foundation is proud to host the General Rose Monument Fund, through which you can make a donation in support of the statue’s production, installation and maintenance.