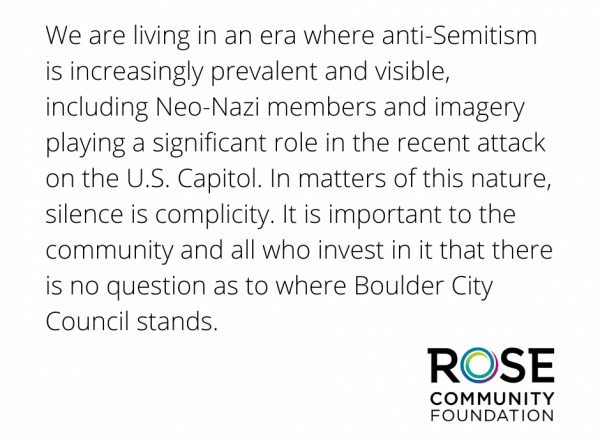 A Letter to Boulder City Council

I am writing on behalf of Rose Community Foundation, which has had close ties to the Boulder Jewish community and community-at-large for over two decades during which time we have distributed more than $20.5 million to nonprofit organizations and agencies in Boulder. We have philanthropic partnerships with several Boulder synagogues and are proud to count many organizations in the Boulder community among our grantees, including but certainly not limited to: Boulder Jewish Community Center, Intercambio, Boulder County Aging Services, Emergency Family Assistance Association, Meals on Wheels of Boulder, Access Opportunity, El Centro Amistad, There With Care, Clinica Family Health Clinic, Via Mobility Services, Motus Theater, Out Boulder County, YWCA Boulder County, YMCA Boulder Valley and CU Boulder Hillel. Additionally, several Boulder philanthropists house their donor-advised funds with us, and we are honored to support their philanthropy. We also have Boulder-area representation on the Foundation’s board of trustees and Jewish Life committee.

Like many in the community, we were shocked and horrified to read reports – on International Holocaust Awareness Day, no less – about recent comments made by Councilwoman Nagle equating Boulder’s proposed prairie dog mitigation efforts to the intentional extermination of Jews in the Holocaust.

As the Anti-Defamation League Mountain States Regional Director Scott Levin stated in his official response yesterday: “The Holocaust will be forever remembered as one of the most horrific events of the 20th century. The murder of six million Jews and millions of others carried out by the Nazis and their collaborators was the largest recorded genocide in modern history. There is simply no equivalent event, historical or current, that compares with it. Inaccurate analogies cheapen the memory of millions killed by the Nazis. They also diminish society’s ability to effectively address the actual substance of the problem being discussed. We ask community members and elected officials to avoid using Holocaust and Nazi analogies and to consider the impact those analogies have on community members, particularly those who have family members who were murdered by the Nazis.”

Furthermore, as noted in The Colorado Times Recorder’s January 27 coverage, the comparison of Jews to rodents is a longstanding anti-Semitic trope literally used by the Nazis. The fact that Councilwoman Nagle’s only response to the Colorado Times Recorder article today was “All I have to say is I am Jewish” does not in any way defend or excuse her statements nor does it diminish their destructive, divisive and dangerous impact.

It is our fervent hope that the Boulder City Council will collectively issue a public denouncement and condemnation of the sentiments expressed by Councilwoman Nagle and publicly re-affirm its commitment to the cultural diversity and inclusivity of its community. We are living in an era where anti-Semitism is increasingly prevalent and visible, including Neo-Nazi members and imagery playing a significant role in the recent attack on the U.S. Capitol. In matters of this nature, silence is complicity. It is important to the community and all who invest in it that there is no question as to where Boulder City Council stands.

Update: On February 2, Boulder City Council voted unanimously in support of a statement rejecting false equivalencies to the Holocaust.