Major General Maurice Rose is an American veteran of World War I and World War II. 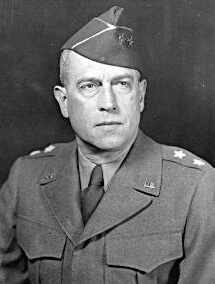 He commanded the Third Armored Division and was the highest ranking Jewish officer when he was killed in action in 1945 while serving in Germany. In August 1948, Dwight D. Eisenhower, then an Army general, came to Denver to dedicate the cornerstone of General Rose Memorial Hospital to honor his friend.

Like Major General Rose, our namesake via the hospital, we aspire for Rose Community Foundation to lead from the front – in our case, in areas related to equity, justice, inclusion, engagement and generosity – to address critical needs and opportunities in our community.

Rose Community Foundation is proud to host a fund for the creation and installation of a bronze statue of Major General Maurice Rose by famed sculptor George W. Lundeen, honoring the local WWII hero and Jewish legend who is also the namesake of Rose Medical Center, and subsequently of Rose Community Foundation. The monument will be located directly across the street from the Colorado State Capitol in the newly named Colorado Veterans Park.